Blogger and popular racist Jussi Halla-Aho published a new advertisement in yesterday's City-magazine. If you look carefully, he appears to have grown a wee little toothbrush moustache. 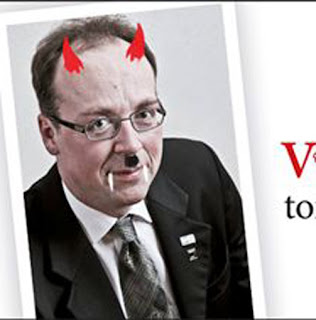 It's evidently not a mistake, he actually went and gave his ok to this advertisement. He says he hopes to make people pause and reflect on how the "mass media is controlling them." The text in the advertisement encourages people to vote "just for the f**k of it." My guess is he finally lost his mind and now actually thinks he is Hitler.
Posted by Joksu at 17:31