According to Helsingin Sanomat today, the True Finns' poll ratings have began to drop in every constituency. The anti-immigrant protest party seems to have lost a lot of its votes to the more traditional working class party, the Social Democrats. The True Finns now rank behind three parties, where just last month they seemed to be on their way to becoming the second largest party. There are a still lot of undecided voters, with up to a third still saying they may change the party they're voting for. The poll by TNS Gallup has the True Finns at 16.9%. 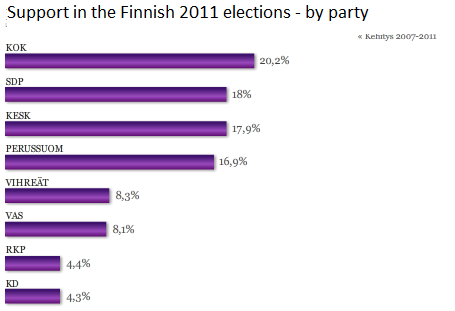 Meanwhile, in Finland violent attacks towards politicians continue. Last night in Jyväskylä a Green Coalition campaign office had its windows smashed in a cowardly attack. The Green Coalition is among the most vocal opponents to the True Finn party. Coincidentally, of course.

The middle Finland town of Jyväskylä was in the 90s known for its active skinhead scene, who made the news on a regular basis with racist attacks towards immigrants and perceived liberals. This week has seen unprecedented violence towards politicians, with a National Coalition candidate being attacked by a thug wearing a bulletproof vest, another National Coalition candidate being punched while handing out  fliers and Centre party candidates' posters being systematically vandalised. So far no True Finn candidates have been targeted by the violence. A neo-nazi group called National Resistance with ties to the True Finns' sister party Sweden Democrats has claimed responsibility for at least one of the attacks. Coincidentally, of course.

The most recent poll ratings from Jyväskylä in the Keskisuomi parliamentary constituency, show that it is likely for the True Finns there to get two MPs in parliament. This is a huge and I mean historically huge gain, because the True Finns have gone from no MPs to polling above the Social Democrats in the space of four years. Just to give some perspective, the Finnish Social Democratic party was founded in 1899, a full 18 years before the Finnish independence. The True Finns got their first MP in 1995.
Posted by Joksu at 17:58