A word about the True Finns' campaign manager, Matti Putkonen. He was convicted of rape in the first degree in 2005 while employed as Metalliliitto's (Finnish metal workers' union) head of communications. Putkonen was ordered to serve 8 months in prison and to pay his victim €10,000 in damages. This in a country known for its leniency towards sex offenders. The trial was held in secret,  but considering the severity of his sentence it is likely his victim suffered considerable physical harm. This happened five years ago. 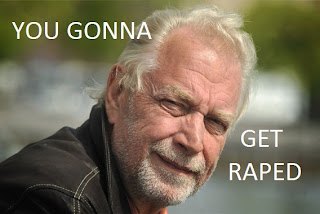 I won't call it ironic that a populist party like the True Finns, most voters of which will froth at the mouth raging against the light sentences handed out for rape in Finland, should have a convicted rapist as its campaign manager. It would be ironic if they didn't know about his sentence (which made headlines at the time). No, this is just hypocrisy at its finest. That is of course unless mr Putkonen is willing to listen to the TF-voters and get castrated like a sex offender apparently should.
Posted by Joksu at 18:03